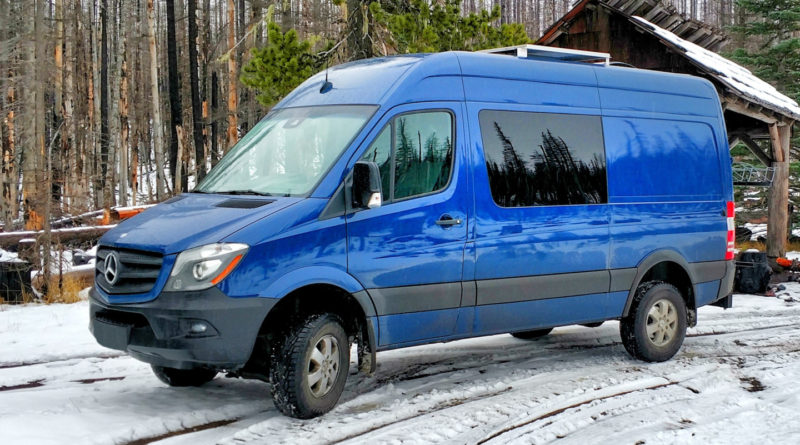 Building up our 4×4 Sprinter Van, DAPHNE, was (and lets face it, still is) a very fun project and I’ve enjoyed sharing the process with lots of folks. We have also very much enjoyed using our Sprinter Van to take us on some great adventures – DAPHNE (Dynamic Adventure Pursuit House Near Everything) really is everything we ever wanted in a camper / adventure van!

We’ve had such fun building and re-building our van, we’ve added van related content to the Points Unknown YouTube channel. Check it out! And subscribe if you want to stay up to date on our latest van projects and adventures!

Unlike some folks that are able to quit their jobs to cruise around the country or are able to work short hours remotely, we’re just regular people with regular jobs, working hard to play hard. This is also why our van build focuses so much on utility and efficiency rather than aesthetics – we’d rather be out mountain biking or skiing than working on the van (though, I have to admit – I do enjoy adding useful features to the van – which is why the project will never end).

Diving into the van project was a pretty daunting task. Like most we took to the internet quite a bit, even before we got our van (we had a long wait from order to receipt) and devoured all the information we could find. I definitely owe a huge dept of gratitude to all the contributors over at sprinter-source.com, without which we would not have had the confidence to drill those first holes or do anything else, for that matter. We cataloged all of our internet research on shared note platform (we used Microsoft OneNote, but Evernote, Google Keep, etc are all fantastic options). That kept all the research organized. And we had one big master list of all the evolving things we wanted to do and what we needed to do them – it includes most all of the work we have done to date and a few ideas we have for the future.

When we first bought our van, it was just before Halloween (Late October) and our goal was to have it ‘livable’ (meaning, capable of being slept in) by Thanksgiving (late November). The first thing we did (the day after we bought it) was move the back seat back to the 2nd seating position. Since winter was coming and our first planned trip was up in the central cascade mountains near Mt Bachelor, we had four priorities:

To do this right and somewhat in sequence, we quickly realized we would have to add a few more things to the to-do list – starting with removing the factory headliner, our first big chore and still probably one of the most difficult things we had to do. While we had the headliner and wall panels out of the van it made sense to put in the necessary electrical work – including lights, 12V (cigarette light type), and USB outlets. And before we could permanently affix our bed platform to the sides of the van we figured we should put in some kind of wall panels (our crew van only came with a couple factory wall panels). This was also nice for covering over the insulation and electrical wiring.

With some pretty focused and diligent work (mostly ever evening and weekend between Halloween and Thanksgiving) we achieved our goal of being camp ready for the thanksgiving holiday. It was a good thing too, because temperature at Mt Bachelor were in the single digits (Fahrenheit) over the weekend and we were super thankful for our heater and insulation.

One thing that became clear on that first camping trip was that we needed to have a way to passively charge our “house” power system and one battery was not enough. So we installed solar panels one snowy weekend in early December. This was one of my favorite projects on the van and I am so excited every time I can “charge my phone for free”.

After that we just enjoyed the van for the winter. We tested various other configurations out and did more research, but mostly we just skied a lot and left any further van refinements to the following summer. Over the course of that break-in period we learned a lot about the things we wanted/needed and also garnered some lessons learned about our previous building techniques. Like our preference for Plusnuts over Rivnuts. So when the next summer rolled around we got to work on some new projects – like adding various accessories to our camper van build. We also added some flare – like laminate wood flooring (so much for being all utilitarian!).

While the initial goals of getting the van up and running for camping in a short time frame were functional, part of the fun of owning a DIY camper van is being able to find what works AND what doesn’t, and continually upgrade. We continue to make changes to our van.

We added a kitchen module (a replacement for the portable camp table we used initially). This kitchen bolted into the van floor, using the seat escutcheons and tie-down points, but was still removable when needed. This kitchen was more functional, but still…. pretty ugly.

The first round of upgrades dealt with the horrible factory stereo system. The Audio15 head unit and associated factory speakers are just awful. To fix their shortcomings we first tried to replace just the speakers. When that didn’t really have the desired effect, we added an aftermarket amp to power the factory head unit and aftermarket speakers as well as a separately powered subwoofer. That did the trick

The solar panels were great, but we had room for a third. So we added it. We also upgraded to an MPPT solar controller and added a cheap battery monitor / ammeter, so we could better understand our power draw.

Lastly, the first round of upgrades required replacing our heater controller. The EasyStart timer control module never worked right, would randomly turn off, and continued to be problematic despite many many many hours of troubleshooting. Troubleshooting led to installing a high-altitude kit – which turned out not to be the issue, but is handy. Ultimately, the fix was easy (and only moderately pricey) – replace the EasyStart Timer with a different control unit – just the regular ‘EasyStart’. Problems solved.

In the next round of upgrades, we re-did the kitchen again, moved it to the other side of the van, and added a hands free paddle switch for the water pump. We replaced the factory ceiling with something much nicer and upgraded the walls to tongue and groove boards. As well as adding some additional lighting over the bed platform.

We also created a new ‘bluetooth house stereo’ system – to utilize our sweet amplifier, but avoid having to turn on the stock head unit (which as far as I could figure out can only be turned on by the key (via the CAN bus)

And that’s basically where we are at today. That’s the narrated version of our van build, so far. If you are still looking for an index to our van build related posts and this format just doesn’t work for you – check out the Sprinter Category Listing.

Of course, the adventure in van building doesn’t stop there. Already we’ve got plans for a new kitchen, lowering the bed platform (to make it easier to get into and out of bed, as well as increase the dining/seating area, and creating a new battery tray underneath the van.