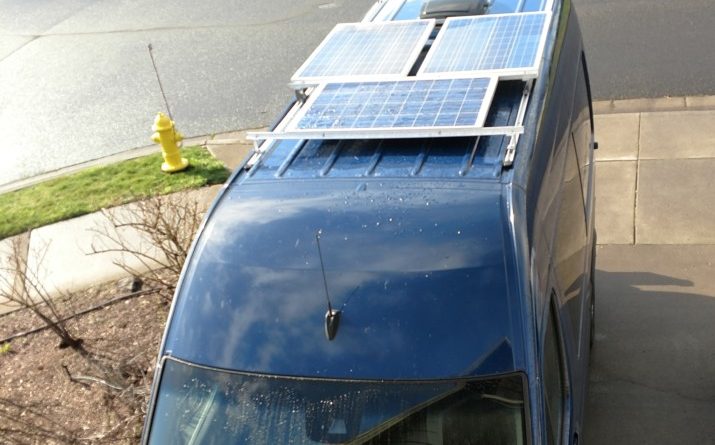 The kit that we originally purchased for solar power and battery charging in the van has been absolutely great. No problems to report after a year of use. But, as always, there are tweaks to be made that can improve things. At the time we got our solar setup I was (as usual) on a budget – but I always planned to upgrade the solar charge controller when the right time came. And so it has come to this. 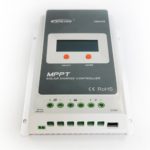 After a bunch of research we went with the EPEVER 30A MPPT Solar Charge Controller Tracer A 3210A. This seemed to balance functionality with cost pretty well. Hookup was very straightforward, especially because it was really just a replacement of the original charge controller that came with our windy-nation solar kit. I can’t really say weather or not the efficiency of this new unit is providing all kinds of benefits (since I have no way of really comparing it apples to apples with the previous controller) but I can say that it works very well. One of the features I really like about it is the ability to plug it into a laptop or phone (android and iPhone apps are available) to get extra information about what the charge controller is doing and easier access to the settings. The USB to charge controller adapter is also fairly inexpensive, especially when purchased with the external temperature sensor, and the cool information you get out of it made it definitely wroth it for me. I just like being able to confirm my settings in the app and then watch how the charge controller changes from float to boost charging based on the various loads applied and supplied to the system. Definitely worth the upgrade cost – especially since a larger controller was needed anyway to accommodate the third solar panel… 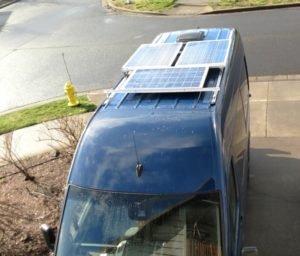 Whats better than 2 x 100 watt solar panels? 3 x 100 watt solar panels! And so it was that we added a third solar panel to the roof of our van. The way I saw it, we weren’t really going to be able to do much with the roof space – so much of it was already taken up by the first two panels. So that was wasted space that could be utilized to generate more power. With solar panels continuing to drop in price, we could only bide our time so long until we pulled the trigger on this upgrade. To match the other two panels we already had, we went with another windy nation 100 watt panel. Because it wasn’t snowing during this solar panel install, I took a little bit more time to take some photos so I could explain the mounting a little better. Similar to the last time I utilized aluminum channel, angle, and the slider

inserts to mount the third panel:

Same drill as before, only this time the center mount is split between the forward and rearward panels. 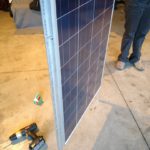 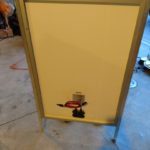 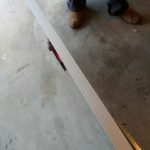 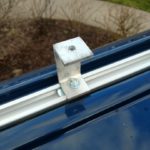 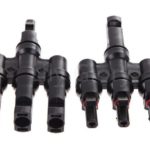 Wiring everything up is also very straightforward the second time around. To add a third panel all I had to do was replace the 2x MC4 branch connectors with a 3x MC4 branch connectors. Of course, if I would have gone with a significantly larger wattage up on the roof I would have needed to change out the cables to something larger. But a quick check of the cable gauge and the acceptable power indicated I was fine there with what I had (but something to keep in mind, depending on your cable runs and original cable gauge).

Lastly, with all this solar power it would be nice to know what its doing…

I really wanted a Xantrex LinkLite Battery Monitor. Those things look super cool and are all the talk on the forums. These things claim to :

But then I found this: DROK DC 0-120V 0-100A Digital Multimeter Charge-Discharge Battery Tester, Volt Meter/Ammeter/Watt Meter/Time/Capacity/Electricity Usage Monitor, LCD Color Screen with Overvoltage Protection. With a product name like that what could possibly go wrong. I read the reviews and everything sounded pretty promising. Here is what it claims to do:

Low and behold, so far it works as promised. I am sure the more expensive ones do more, are more accurate or ave other bells and whistles, but this little unit does exactly what I expected. I am really happy with the purchase overall.

Installation was fairly straightforward. The instructions were okay and the added comments and pictures on the product page helped. All I had to do was intercept the negative terminal from my fuse box, where it goes to the vehicle ground and also provide a small (+) lead from the fuse box to power the electronics. The “shunt” as its called connects to your main negative terminal before it goes to chassis ground or your battery bank. By collecting the negative terminals it can read the power draw of all your electronics and provide the promised feedback. Note, if you only ran single wires to your electronics and then grounded to chassis, connecting to the negative terminal on your fuse box may not work as desired. Fortunately, I had anticipated getting something like this when I was doing my wiring and so everything we wired came back to the negative bus on our blue sea fuse box. If you terminated all of your devices negative connections to the chassis, you have to intercept the negative connection to your batteries (as noted in the comments below). This alternative method also relieves the alternator charging display issue shown in the (very detailed) diagram below – but comes with its own complications if you have a batteries in different locations (like we do).

The charge monitor display is separate from the shunt. The two connect together via a USB cable (included) or the monitor can connect wirelessly to the shunt. I tried it out both ways, but since I knew I needed to power the monitor anyway, using the direct USB connection seemed more straightforward and easy enough. I found that you couldn’t have the monitor too far away from the shunt or it would lose connection – YMMV. One thing to note though is the included USB cable (Type A male to type A female, USB 2.0) is fairly short. I ended up buying a longer one to ease the strain on my connections. Depending on your mounting setup, this might be necessary for your as well.