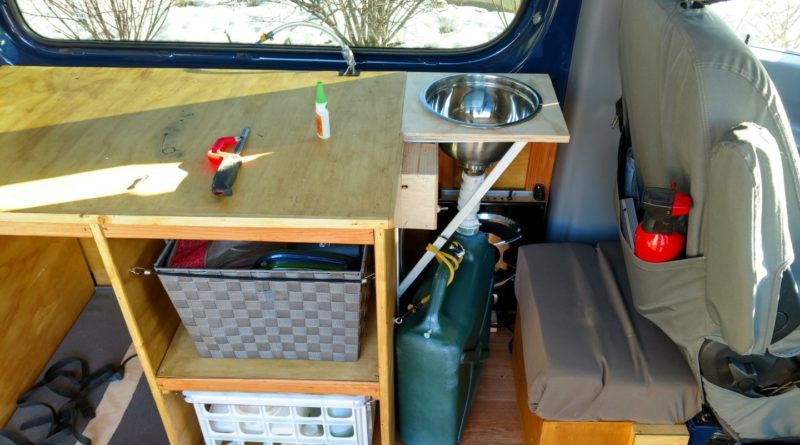 Our adventure van kitchen setup is ever evolving. But, while it is still far from complete, I thought I might as well give it a write-up to at least share what has worked well (and hasn’t) so far. Of course, the van kitchen layout (like most things in the van) is highly dependent on personal preferences and needs. As with most things in our van, we focused on function over form and have so far been very happy with the outcome. Though its likely to continue to undergo changes (hopefully improvements) over the next few years, below is a description of our current kitchen build.

Built from a couple sheets of 1/2″ plywood, with some 1″x2″ firring strips as trim, our adventure van kitchen is highly functional if not the most pretty piece of furniture ever created. It features three main storage bays and counter top with sink extension. The large bay holds the dometic cooler fridge on a roller cart for easy access. The two smaller bays hold baskets for dry goods and cleaning supplies – held in place by small bungee cords (we love bungee cords). This sink is constructed from a stainless steel cooking bowl, with a hole cut in the bottom and a standard sink drain installed. We pump (using a small 12V diaphragm pump) out of a blue 6 gallon water tank and store wastewater (gray water) in a green tank. Everything is plumbed together with surgical tubing (clean water side) and standard drain plumbing fittings (gray water side). Like all things in our van it is designed to be easily installed and removed and is held in place with large hook & eye hardware.

I know a lot of the above items seem random. I assure you they all have a useful spot in our kitchen setup. Also, please note, a lot of the items were purchased from a standard hardware store (ACE, actually). Links above provided just for reference to what the item is.

The pictures are worth thousands of words, so I’ll let them do most of the talking and try to stick to just a few key explanatory points about the whole assembly and some of the more interesting pieces. 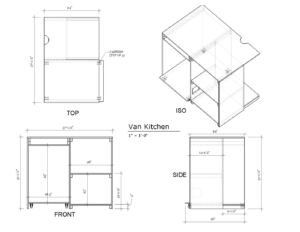 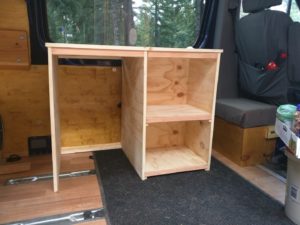 The water system is fairly involved, so I figured that should get its own section. Plumbing really is a pretty simple concept, but the implementation of the concepts took a bit of time for us to figure out, so I figured I would document what we did.

First of all – please forgive the messy sink shown in the photos. No we are not slobs, the kitchen has been out of the van for  a few weeks (van has been in multi-passenger ski mode with the back seat in) and a few projects have been undertaken in the garage adjacent to the kitchen setup. Yes, we will clean everything before it goes back into use.

Second – on the potable water side keep in mind that this is stuff that is going into your body and use appropriate materials! You should use storage containers, tubing and fittings that are approved for drinking water use.

We searched around a long time for a small sink that would work for our van. A big sing would take up way too much space and we figured we could just wash dishes in a wash-tub, for extra space. The key is having a place to dump the water after washing is complete. We didn’t like being the kind of campers that dumped dirty water on the ground next to our van. We found a few suitable sinks, but most of the little bar sinks we found were ridiculously expensive. We had no desire to spend a hundred dollars on a sink for our van (yes, we are cheap like that). So we did what any self-respecting DIY van builder would do: we built our own sink out of a standard stainless steel kitchen bowl (total cost: about $15).

As I am sure you can see, both the freshwater and gray water side are designed to easily be detached and refilled / dumped when needed. Rather than being permanently installed water systems, we can fill up our freshwater from a faucet or yard hydrant and dump our gray water down a domestic sink or toilet. Easy as that.

And that pretty much covers everything we have done to date relating to the kitchen. I’ll update this page if we realize any big mistakes or make any upgrades.