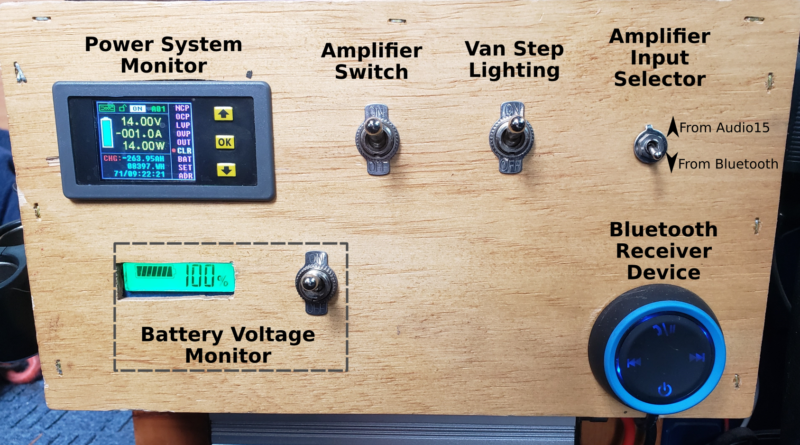 Small wireless battery powered speakers are pretty ubiquitous these days and offer decent sound for the cost, but we thought it would be much nicer to enjoy music in our camper van from our van’s upgraded stereo system. After all, we did invest in a pretty nice sound system.

The stock stereo (Audio 15) head unit on the sprinter is powered by the starter battery and controlled (on/off) via the CAN bus. I tried to come up with a way to allow it to be powered from the ‘house’ batteries (our van’s battery bank) and turned on with both the ignition and a flip of a switch, but in the end this didn’t seem to be practical (likely easier with an aftermarket head unit). So instead I used a separate Bluetooth receiver wired directly into our aftermarket amp. At the flip of a couple of two switches we can turn on the amp and re-route the amp input from the stock head unit to the bluetooth receiver.

A few things needed to happen to make this work:

Again, the goal is to have ‘house’ music inside the van powered by our ‘house’ battery bank, bypassing the head unit, but still using our aftermarket amplifier/sound system.

I’ve provided lots of additional details below, but the basic wiring to achieve this goal is provided in the diagram below. (Downloadable PDF, here)

The diagram and this post references items in my specific setup (audio15 head unit connected to an amplifier via an LC2 line-out converter), but this should work with any head unit and amplifier setup.

Powering and Turning on the Devices

Power must be provided to the Bluetooth receiver as well as a new “turn-on” signal sent to the amp. This is fairly easy to wire up, as it’s essentially just another 12v circuit from the van’s ‘house’ fuse panel with a switch on it for control. But to make it more complicated I wanted to have the new Bluetooth receiver only turn on when I flipped the switch, not any time the amp was turned on (since the amp turns on with vehicle ignition as well).

To achieve this, I used a diode. A diode is a semi-conductor device that essentially acts as a one-way switch for current running through a circuit. The diode, when used as shown in the above diagram, allows current to flow to the amp ‘turn-on’ input when I flip the switch, but does not allow current to flow back and turn on the Bluetooth device, when initiated by the ignition.

As shown, switched 12V power should feed both the Bluetooth Receiver and provide a secondary amplifier ‘turn-on’ signal (in addition to the signal from ignition discussed in previous posts). The diode is placed between the new 12V power switch and the amplifier.

The audio signal wiring is a little more complex and requires the use of a 6-terminal Double-Pole-Double-Throw (DPDT) switch. An “On-On” type switch is preferred, because audio can always be routed ‘somewhere’, but an “On-Off-On” style switch is also fine (actually it’s what I am using – I just never use the middle ‘off’ position)

Connecting both audio signal inputs to the amplifier in parallel, without switching, caused audio issues (see misc. notes at the end of this post) – so a switch is required/recommended.

Using this switch for stereo audio signals is a little different than when using it for power, but it is just as effective. The diagram below shows how I wired it up. Just like wiring up power, we are switching the positive side only and allow the ground to pass around the switch. Since this is audio and we want to maintain stereo sound we have to do this for both the left and right audio signal channels.

Yes, it seems very complicated (at least to me), but taking it wire by wire it really isn’t that bad.

Originally, I had used an RCA splitter (two RCA inputs/female to one RCA output/male) to bring both sound devices into the inputs of the amp. While a lot simpler than the wiring I ended up with, this did not work. Allowing audio signals to pass through both sides of the circuit cause severe distortion of the audio and a significant reduction in the audio volume (and quality). As such, utilizing this simplification is not recommended. YMMV.

As stated previously, the Bluetooth unit I used is no longer available, here are some other options which look good.

Lastly, originally I had our rear speakers mounted into the fixed wheel well boxes. This was great for just driving around, but not amazing for when the van was parked – especially for when we were hanging out outside the van and desiring music. So we bought pre-fab speaker boxes and put our 6×9 speakers in those. Connecting the boxes with extra long speaker wires allows us to move the speakers around as desired. They clip in to designated positions when driving – but when parked we can, for example, move them into the door to project the sound outward.