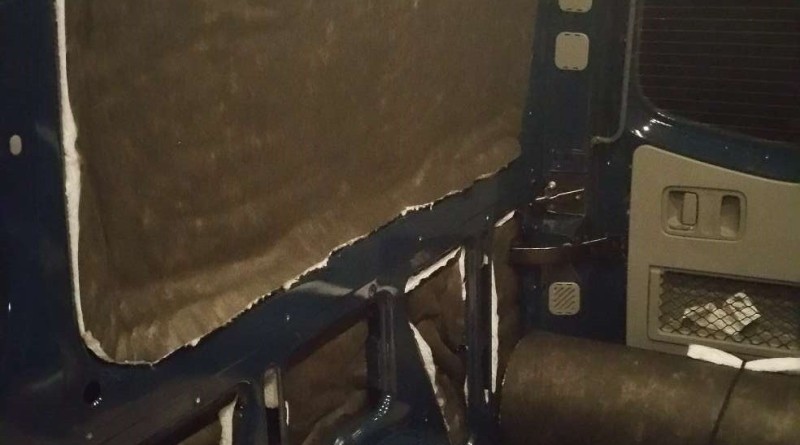 There are literally a billion different ways to do sound deadening and insulation. Having combed the forums for hours my head was filled with all kinds of nonsense. Like everything in life you can do as much or as little as your desire and budget allows. And there are plenty of people with lots of time and money that have very strong opinions on how you should insulate your van. In the end I must admit that I was a little susceptible to that coaxing and probably did some things I didnt really need to do, but it all turned out just fine anyway.

Here are some links to a few threads I bookmarked regarding insulation because I thought they were useful. You can find a billion of these is you search:

The van was really very loud when we first got it – like so loud it was hard to have a conversation in it while driving down the freeway. And every time you hit a bump it would make this big booming sound like banging on a drum. Thankfully we have been able to mitigate most if not all of that.

We used the, now standard/defacto, thinsulate and reflectrix combo for insulation. With some rubbery sound deadening panels thrown in for good measure. The layup went like this (from outside to inside):

In hindsight I am not sure what the sound deadening panels did though, and they were very expensive. You hear about people covering the entire van with Fatmat or similar foil backed butyl sound deadener – truthfully I am not sure what that does. You read the manufacturers lit for “fatmat/dynamat/whatever” style sound deadening and they say you only need 20% coverage. Of course, you would think if it was better to have 100% coverage they would say that and sell more of the stuff. So clearly (at least to me) you dont need 100%. But I jumped on the bandwagon a little but and said hey, i should get as much of this stuff as I can afford! The Noico stuff is priced really well on Amazon and has what appears to be the same if not better specs than some of the other name brand stuff. The fact that it didn’t have any smell (which I had heard that fatmat smelled awful) was appealing – and I can confirm this Noico stuff does not smell at all.

So we ended up purchasing 36 square feet of the 80 mil Noico Butyl Mat and another 50 sq ft of the 50 mil mat. Which I can tell you now was too much. Half that would have been fine. Heck, I am fairly convinced that none of it would have been fine, the thinsulate alone is awesome (more on that later). But your ears might be better tuned than mine (likely, too much rock music) – so don’t take my word for it. I have a lot left over and will be using it to cover 50-ish percent of the floor at some later date, maybe that will make me a believer, stay tuned.

The sound deadener is very easy to cut using a utility knife and we cut various shapes to fit in the larger panels. I used the knock test, if when I knocked on it it made a booming sound, we put some Noico panels on it. Because we were applying the Noico in the middle of a cold November we used a heat gun to heat it up before applying it to the walls. We also ran an electric heater in the van to bring the van temperature up to something in the comfortable 50+ degree range. 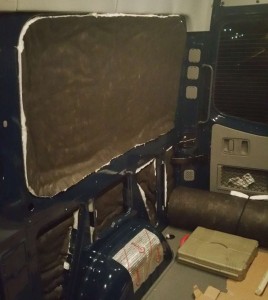 We selected SM600L Thinsulate insulation above the myriad of other insulation options and I am so glad we did. This stuff is really great! Lots of folks use spray in foam, fiberglass batts, cotton batts, rigid foam, all kinds of stuff. I am sure these are all great. But the thinsulate was so easy to work with and install I am really happy we chose it. We purchased 40 linear feet from Hein at Impact3D which turned out to be the perfect amount.

I cant really say enough good things about Thinsulate. It was easy to cut with scissors. Didn’t smell bad. Didn’t have to be installed wearing a mask or gloves. Didn’t make me itchy after installation. Really was just a joy to work with and worked so well. I was amazed at how well it sound deadened the van. So amazed I wondered why I installed the Noico product at all. And it made an instant difference to the warmth of the van. Suddenly our little electric heater that we were using to make it bearable inside was keeping up just fine. I could now work in the van in a t-shirt instead of a down jacket! 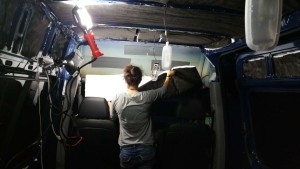 To install we used the recommended 3M Hi-Strength 90 Adhesive spray. Just sprayed a bit on the back (non fabric’d) side of the Thinsulate and sprayed some more on the van skin itself. Then pressed the Thinsulate against the van skin and patted down around the outsides and middle. After a few seconds (really hardly any time) it was stuck and we could move on to the next section.

I would be remiss here if I failed to mention that my wife is the queen of insulation. She basically insulated the entire van while I did… other stuff (mostly supervised and made announcements about what is next).

For our final insulation layer we used Reflectix. I bought a big roll online with 400 square feet of material from home depot and had it delivered to our door. This was probably overkill but I was concerned that we would not have enough with only 200 square feet and because of bulk pricing you basically get 100′ for free if you order the big roll. So that’s what I did. And as a bonus we had plenty of Reflectix left over to build magnetic window coverings (more on that in a later post).

I’ve seen postings of people using the reflectix has a vapor barrier. I knew regardless of how hard we tried we were not going to get a true vapor barrier, so instead we used it similar to how we did the Thinsulate. It was fairly easy to install, though that reflective tape is really hard to peal away from the backing (at least for me). 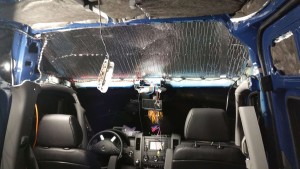