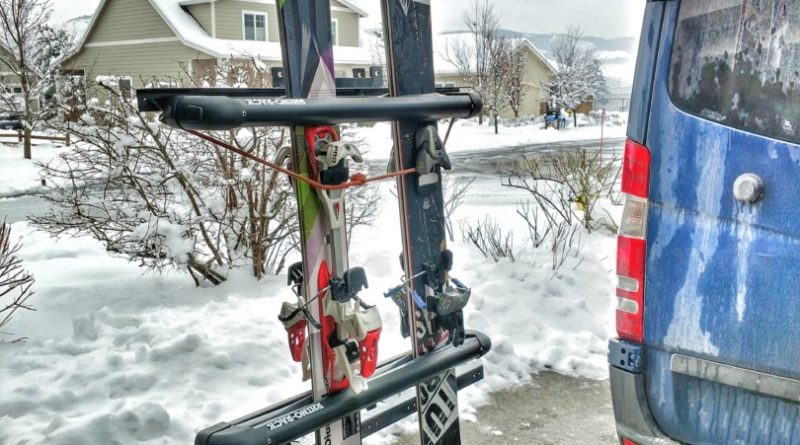 But there is still some good information in this post – so feel free to come back, once you’ve read that one. 🙂

With ski season in full swing here in the pacific northwest, it was time to get serious about a project I have been thinking about for a long time; the vertical ski carrying rack. Before, when I had normal height vehicles, I firmly believed that the rocket box (or similar type of roof box) was the perfect ski carrying system. It was easy to use and versatile in its carrying capacity. Even after the locking system and hinges started falling apart on my roof box I still kept on using it, without a problem. Holding it together with coat hangers and bungee cords. But all that changed when we got the van. The high roof sprinter van is just too tall for a rocket box. Sure you can get ladder, but who wants to be climbing a ladder in ski boots?? This is also true for a lot of the taller SUV’s – you pretty much need a step stool to access the roof box (or risk a brain injury balancing on the rear tire) – and there is nothing convenient about that. So a ski carrying solution was required.

In short, the best ski/snowboard carrying solution I have come up with for a tall vehicle is to carry them vertically on a hitch rack. Simply attach clam shell style ski racks (roof racks) to the vertical post of a typical bike hitch rack using some steel angle iron and flat plate. Fasten everything together tightly with stainless steel bolts and lock-nuts.

The first idea for a ski carrying solution were to put all these webbing loops underneath the bed platform. This worked extremely well. It kept the skis from taking up valuable floor space and the loops also could be used for all kinds of other things. The setup was simple (in fact I did it in about 20 minutes when we were packing up for an Anthony Lakes trip), I simply created loops out of 1″ flat or tubular webbing across the bottom of the bed platform. I used 1″ wood screws threaded into 1″ fender washers in order to firmly hold the webbing in place without fear that the webbing would unravel. We ran this system for season and didn’t complain to much, but it wasn’t perfect. Long skis stuck out from the bottom of the bed platform and wet skis, put in storage after an epic day of skiing powder dripped onto whatever was stored below them. The van started taking on that musty wet clothes smell. A new solution was required.

Clearly storing the skis outside was important. But again, the typical roof rack setups were not going to be very convenient – even if I did bite the bullet and get that awesome side ladder that I covet. I looked around and couldn’t really find any store bought viable solutions – so I did what must be done and designed my own.

The concept is fairly simple: attach the clamshell style ski racks to the vertical post of the hitch rack. In reality it took a little more doing, but only took an afternoon to develop and install v1.0.

First I cut the steel angle in half so I had two 36″ sections. The 6 ski / 4 snowboard racks I purchased were about 32″ wide so these could be mounted to the steel angle. I am not sure about other ski racks, but I chose the Rhino Racks because I could tell from the website that the bottom of the rack could be mounted flat to the steel angle. In this way I could use the angle itself to provide some additional support to prevent the rack from twisting under the vertical load (which I imagine they are not particularly made for). I drilled holes in the angle to match the spacing of the mounting holes on either end of the ski rack.

How you mount the angle to your bike rack really depends on what bike rack you have. For me, I wanted to avoid drilling extra holes into the rack and so was able to use existing holes in the existing upper and lower rack sections. I also needed to make sure the racks would clear the bindings and I also wanted to keep the tails of the skis from being lower than the bottom of the vehicle. This of course will vary from vehicle to vehicle, but I found for my touring bindings (which have the widest spacing of all our skis) I needed a minimum of 24″ of spacing between racks. Since the existing holes didn’t meet this criteria (and also wouldn’t prevent the rack from twisting, if mounted through only one hole) I had to add some additional steel.

Using the 1″ flat steel bar I cut off an 8″ strip and drilled it so it aligned with the existing holes in the lower mast section and cut another strip to align with the existing holes in the upper mast section. The 1″ flat steel would be mounted parallel to the rack mast (vertically) while the ski racks, mounted to the angle would be mounted perpendicular to the rack mast (horizontally). Spacing of the two rack sections is, of course, critical.I welded the flat steel to the angle at the center point of the angle, spray painted the assembly, and bolted everything together.

The one worry I had with this setup was that the back of the vehicle gets so dirty with road grime, I didn’t want that crap getting into my skis and bindings. The solution is easy though; the first couple times I just wrapped our bindings in a plastic bag. This worked fine but is not very elegant. In the next phase, I used a bunch of old nylon I had lying around the garage and made little ski sleeves that I could easily throw the skis in. This works like a charm for keeping the skis clean in transit.

Update 4/2/2017: now that its spring, we have been doing some dual-sport days: biking and skiing. For this, we needed to put the rack in ‘hybrid mode’ to carry both bikes and skis. This was easy to do by just putting the top arm of the bike rack (the one with the wheel trays) back on.

Update 12/10/2017: The Rhino Racks that we purchased for the V1 version pictured above proved problematic for use in the vertical orientation (and may be problematic in general). Especially with fatter skies the connection point would not line up and would require several minutes of pulling and cursing to get things to close correctly. We have since switched to Yakima Powderhound ski racks, with the ratcheting connection system that works much much better.