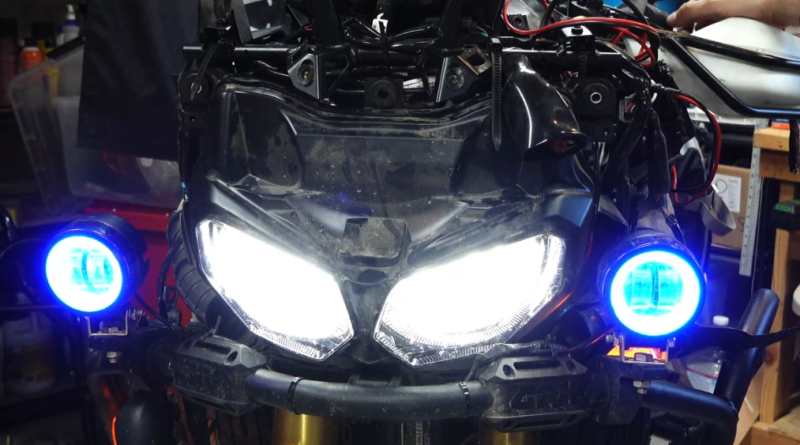 If you have been following along from the beginning, this is technically part 3 of the Accessory Power and Lighting for the Honda Africa Twin series. We started out the series with some basic accessory wiring know-how and a big suggestion to just use the awesome wiring kits from Eastern Beaver. Then in part 2 we dug into the details on how that kit works and how you could technically make your own motorcycle accessory wiring kit, with relays, fuses, wires, and all… but it might not be worth it. Still, part 2 taught us about relays and how they work. Which is going to be valuable now in Part 3 where we are going to use a relay to turn on the auxilliary lights on the africa twin, when the high beam lights are turned on.

What sounds fairly complex to describe is actually not too complex in wiring. To achieve the first goal, a basic switch is all that is required. To achieve the second goal, an additional switch and relay are added, triggered off the high beams.

While simple to diagram, perhaps it is a little complex to wire.

Wiring up auxiliary lights for the first case is fairly straightforward. Especially if using the 3CS kit from Eastern Beaver. The lights get wired and grounded as per usual via the switch. For me, this is the switch on the left.

I found that these 1″ switches from Amazon fit perfectly into the instrument cluster at the front of the bike on the left side. Strangely, Honda had a cutout for one of the switches, but for the other one I had to use a 1″ hole saw.

The switches require both the source and destination power wiring and a ground in order to light up. The ground is optional (but required for the LED indicator light), if you don’t get fancy switches that light up you won’t even have the option.

The only thing troubling about the Amazon switches is how bright the blue light is. To make it a little dimmer, I just used some black nail polish over the LED and that did the trick.

The “dummy” accessory plug is located just in front of the instrument cluster, near the headlight. If you have the OEM 12V power outlet, as I do, the plug is in use for that purpose, but does not have pin for the light blue high-beam wire. If you don’t have the OEM power outlet, the accessory plug is just taped in position with a ‘blanked’ cap on it. Remove the cap and attach a spade to the terminal with the light blue wire using a Sumitomo HM-090 4-pin connector.

Attach that blue ‘high-beam’ wire to the ‘signal/trigger’ wire on the micro relay.

Again, the relay is power the relay from the 3CS connector (key switched power), via switch #2 (right switch, in my case) so that the relay only receives power when I want it to. And it’s grounded to the battery negative terminal, as usual. The output power from the relay goes to the lights.

Because both switches share keyed power from the 3CS and ground, I ended up with a mess of wires around them. But carefully keeping things organized meant that everything turned out just fine once it was all wired up.

And once the bike is all put back together all that crazy wiring is out of sight and mind.

Putting it All Together

Need additional help or have more questions? Let me know in the comments!