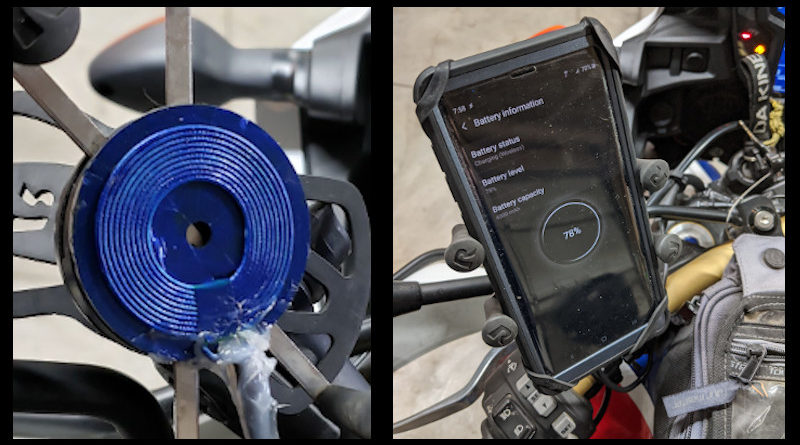 Wireless phone charging is pretty sweet and the charging pads are fairly inexpensive. Vibrating cables (or worse… phone charging ports) to death while mounted on an adventure/off-highway bike is not awesome. Not to mention the risk of damage from plugging in a wet charging cable. But there is a fairly simple solution: A wireless charging motorcycle mount!

Hacking an inexpensive wireless phone charging pad and sticking it to a motorcycle phone mount is a pretty straightforward project. Just break open the charging pad and extract the electronics and coil. Adjust the wiring as appropriate and waterproof the assemblies using nail polish and/or Silicone 2+. Wire it up (to a USB port or stepdown voltage converter) and you’re good to go!

Also, if you don’t want to make your own – you can buy one (but where’s the fun in that?)

I use my phone as my navigation device while riding and its nice to have the screen always on for that (don’t want to have to wake it up, every time I need directions). Of course, in bright sun, with full screen brightness that also uses up a lot of battery. It also means that my phone is exposed to the sun, wind, and rain – the assembly needs to be fairly waterproof. I do a fair amount of adventure/off-highway riding. The roads and trails can be pretty bumpy – so the mount and charger need to be pretty robust. All summed up, here are the requirements:

Several folks have done this before and I just followed in their legendary footsteps:

I have annotated the photo gallery below with my general procedure for building a wireless phone charging motorcycle mount and have also provided some additional details in the narrative.

1. Unbox the charging pad. I went with the “LETSCOM Wireless Charger, Qi-Certified 15W Max Fast Wireless Charging Pad Ultra Slim” because I thought that 15W of power seemed like the right amount (10W recommended by others, 15W must be better?). You can also just order the components, but there didn’t appear to be any savings and the reviews were pretty bad.

2. Hack open the plastic casing. I jammed a screw driver into the side of the charging pad and pried it open. I realized later that there were little philips head screws underneath the black plastic covers on the bottom that would have made disassembly more elegant – oh well.

3-5. Remove the printed circuit board (PCB) and charging coil assembly from the plastic casing. The charging coil is glued to a very lightweight and fragile magnet. Do not try to pry it up with a screw driver! You will break the magnet (I did some damage, but it still seems to work – probably would have been better if I hadn’t cracked it though). For the LETSCOM Wireless Charging unit, the charging coil and magnet assembly is glued to the black casing. I used a heat gun to warm up the adhesive and gently pry it off the back (yes I used a flat head screw driver, but I was gentle).

6-9. Following the suggestion of folks on ADV rider, I separated the charging coil assembly from the PCB. This way I can put the PCB in a safe spot under my tank bag and only have the charging coil directly exposed to the elements. To do this, i simply cut the wires connecting the PCB and the coil and then reconnected them with a longer piece of wire between the two (maybe 2′ long). I soldered these new connections so they are pretty strong and insulated them with heat shrink tubing.

Note: there was also two more tiny unisulated red wires that went “into” the charging coil from the PCB. My only guess is these are part of a temperature control/switch? But I couldn’t really tell what they did from looking at their attachment point on the PCB. I pulled them out of the charging coil and coiled them up on the PCB. They do not appear to affect operation – yet.

10. To protect the PCB assembly, I potted it in silicone sealant. This was new to me, but hackaday has a good write up on how to do it cleanly using 3M Tegaderm (yes, the transparent wound dressing system), which contains all the sealant without making a mess but still breathes well enough for it to cure. And there is also this youtube video, showing how its done. I only had small Tegaderm patches on hand – which made it difficult – but it got the job done. The next time I do this I will use the bigger Tegaderm sheets to better be able to completely wrap the electronics. I kept the USB cable plugged in during the potting process, so that the USB-C port didn’t fill up with silicone, but then unplugged it when I was done, so as to avoid it getting stuck plugged in (I wanted to keep it removable). I cleaned the connector with rubbing alcohol to remove excess silicone.

Note: using the right kind of silicone sealant is important. Apparently some types (type 1) use acid to cure, which will damage the electronics. Silicone 2 or 2+ are apparently safe for electronics. I got mine on amazon, but its also available at most hardware stores.

11-13. For the coil, I used nail polish to reinforce and waterproof this assembly. This YouTube video was pretty convincing that nail polish was the cleanest and lowest profile way to go. I also put a think layer of epoxy on the backside of the magnet for a little extra strength and rigidity as well as epoxying the cable connection to the charging coil, just so there was some extra stiffness there.

14-15. I used 3M UHB tape to attach the charging coil assembly to the plastic plate on the Ram X-Grip phone mount. It fit perfectly. I oriented it so the attached cable is pointed down.

16. To provide USB power, I wired in another USB charging port underneath the seat of my Honda Africa Twin. I could have used the 12V power port up on the dash, but the intent here was to have a more water resistant setup with this – and I just don’t trust that port up front as much. So having another USB port under the seat can serve this purpose (and others if need be). And then I can also have a backup system (utilizing a USB adapter in the 12V port) in case this goes bad.

I wired a USB charging receptacle into my Eastern Beaver power distribution module, as described in this post.

17. Lastly, I velcroed the PCB piece underneath the map flap on my tank bag. This seemed like a good place, out of the direct elements, but still accessible if needed. And is a good intermediate spot between the USB charging port underneath the seat and the phone mount.

After a few test rides wireless charging is working perfectly and I am very happy with the results. The phone continues to charge, even when the screen is on at full brightness and all components appear to be stable during transit. Will update as testing continues.

Complete gallery of each step: