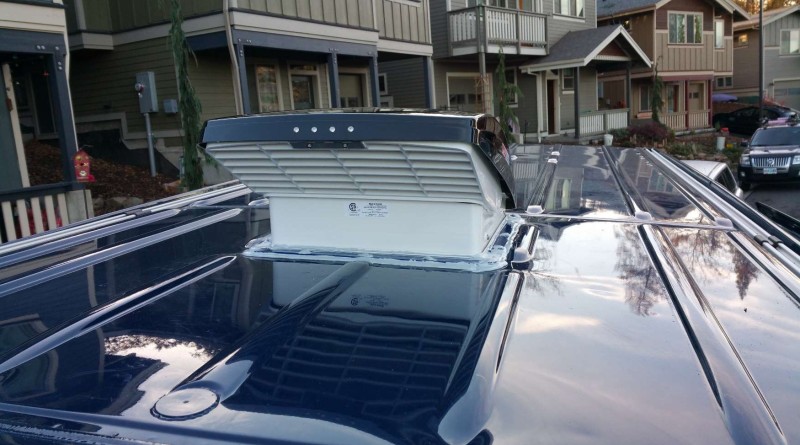 Probably the one thing every van owner turned DIY conversion specialist can agree on is that putting a big hole in your brand new van is very scary. I spent hours agonizing over the best way to do it. In the end, it was actually quite easy.

I used what can I think officially be called the “new standard” fan install method pioneered and made popular by ‘Graphite Dave’ on the sprinter forums. Basically it consists of cutting out a plywood frame giving you a bit more ‘meat’ to screw into through the van roof, rather than just the sheet metal. What you end up with is a very stout sandwich that consists of aluminum bar, fan mounting plate/flange, butyl tape, sprinter roof, and plywood (in that order) held together by nuts and bolts. Below are some diagrams I made up (after the fact) showing what I did. For the plywood, Dave recommends using 3/4″ plywood, which I agree with. Unfortunately, I had 1/2″ plywood laying around – so I used that instead. Originally I had planned on doubling it up (I did cut two frames out), but after I saw how stout it was all put together, I decided 1/2″ plywood was enough. 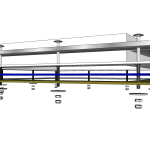 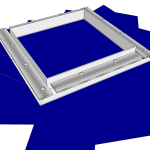 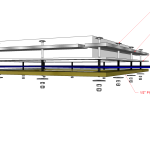 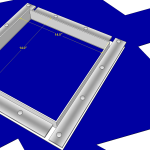 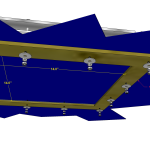 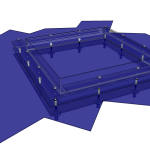 I used a jigsaw to cut out the 16.5″ x 16.5″ outer ring of the plywood and 14″ x 14″ opening in the plywood. The nice thing about doing it this way, is you end up with a 14″ x 14″ square of plywood that you can then use as a template for perfecting the location of the vent in the van, ensuring that the vent is centered, avoids the interior van ribs, and avoids the exterior ridges on the van roof. We decided to place our vent in the back half of the van, above where our bed platform would go. There are lots of good debates online on where the best place to put the vent is. In the end, my wife made the decision and that was that.

There is a good flat spot in the back of the van with short ridges on either side making it easy to locate the center. Unfortunately, the ridges aren’t spaced wide enough to accomdate the full width of the fan mounting flange. As such, I took an angle grinder to the fan moutning flange and took about a 1/4 inch off the two sides of it, where it would have otherwise contacted the roof ridges on the left and right sides and took a tiny bit off in the center on the ‘back’ side of the flange where it came close to that roof ridge.  You can kind of see in the photos of the fan mounting flange how the plastic part is cut away and actually is thinner than the aluminum bar (painted blue) above it. This makes it fit nicely in between the ridges on the van. This shouldn’t have any structural impacts (especially with the sandwich described above) and allowed the flange to fit perfectly between the roof ridges. 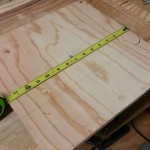 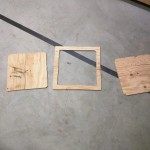 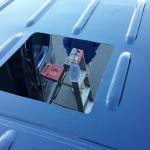 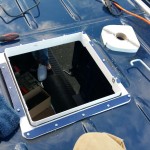 When it finally came down cutting the hole in the roof I again used the Graphite Dave method and used the previously cut out center piece and bolted it through the roof, using a hole I drilled in the center of my mounting location. Placing a bolt through the plywood square and the van skin and bolting it nice and tight, I had a good jig to saw around. Things got a little messy with the jigsaw when the cut got close to the roof ridges, but overall it was an easy cut.

It sounds easy now, distilling that whole cutting part down to just a couple of sentences, but it was certainly very stressful. Of course I got through it and the hole, after measuring and remeasuring, checking the template, rechecking the fit (from both sides!), and cursing a whole bunch, all turned out okay. After that actually mounting the fan was easy. I made sure to paint the edges of my new cut out with rust inhibiting enamel paint – a small can of rust-oleum and a q-tip seamed perfect for the job (and I used that trick on a number of other areas on the van). Then put down several layers of the butyl tape, stuck the flange to the tape, and drilled through the flange holes, through the tape, and through the van. Got all my sandwich pieces lined up (I had already pre-drilled the aluminum bars and backing plywood so those lined up perfectly of course) and after some fidgeting (and a lot of help) got all 16 bolts lined up, through, and tightened up.

The caulking was extremely messy and involved a lot of cursing. That stuff is very necessary, but very nasty. Gets on everything. But its important to note that the Dicor is self-leveling, so even if it looks really bad when you apply it (which mine did) it appears to kinda ‘fix’ itslef over time. But really, as long as you put plenty of it on there it shouldn’t be a big deal how it looks – the van is so tall, who is going to see it? At least that’s what I told myself. The video recommends also putting a dab of caulking over all the bolts, so I did that as well – seems like a good idea. [update: two months and a whole bunch of good northwest weather later (read: rain) I can safely say I must have done something right, no leaks! All is well]

Once all that was done moutning the actual fan into the hole was easy. Just drop it in and bolt it in. Another van project done! 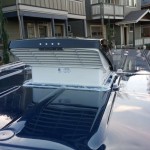 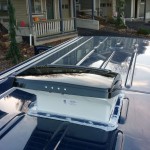