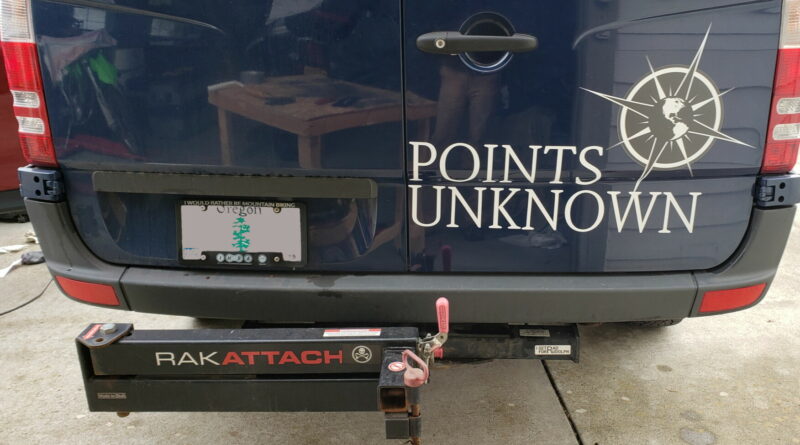 TL:DR – The RakAttach is a great accessory for your receiver hitch and 5 years ago it was a one-of-a-kind product. At achieving its core function, to swing out and provide access to the back of our van, while being robust enough to hold 5 bikes – I give it a 10 out of 10. For longevity and quality of construction, I give it a 5 out of 10, due to coating issues.

I’ve written extensively about our awesome bike rack setup; how we use it, how we converted it to hold skis; and even made videos about it. And given how big of a fan I must sound like, I now feel obligated to provide this long-term review of the RakAttach, a core component of our setup. And ultimately, show how it failed.

In the beginning (the good)

RakAttach was first released in 2015. At the time, it was very unique, with no equal (that I know of) on the market. I don’t think I realized this at the time, but we must have snatched one up pretty early on in production – because we got ours early in 2016 and their website indicates they only started making them in the Spring of 2015.

The RakAttach revolutionized our way of carrying bikes (and skis) while still maintaining access to the back of our sprinter van DAPHNE. I remember immediately being impressed with how robust the thing was – I mean seriously, it weighed a ton and felt very very sturdy when first installed. Others mentioned a lot of wobble when used in conjunction with a big bike rack – we never had any of that (oooh, guess we know why now!). The RakAttach worked great. Easy to lock into place and simple to unlock and swing out, even when fully loaded with bikes. At achieving its core function, I give it a 10 out of 10.

In the end (the bad)

I have no complaints about the function of the RakAttach swingarm itself. It has worked great for the last 5 years. But this piece of kit wasn’t meant to be a permanent fixture on our van – and that’s where things went bad. Sure, we noticed that it was rusting a little bit, but that wasn’t really cause for great alarm – but boy did we underestimate the extent. After 5 years of highly functional use, our RakAttach had to be destroyed.

In preparation for a van road trip down to Moab, Utah where we hauled our dual sport motorcycles for a week of awesome moto riding and camping, we needed to remove our excellent bike and ski rack setup. It had been off the van a few times before so we figured this would be no big deal – we were wrong. The video below provides a summary of the epic journey which was removing the RakAttach from our van’s receiver hitch, but in summary:

I asked RakAttach if I just got a bad one, or if early versions had coating issues that were later fixed (thinking, if it was a known issue that was fixed, perhaps its worth looking at getting another RakAttach) – here is my e-mail and the response that I got back from RakAttach customer service:

Hi – We were a fairly early adopter of the RakAttach (circa mid-2016) and LOVED IT. But recently, when we went to remove it, found that the coating had failed (I mean, I knew it was rusting – but I didn’t realize that the 2″ hitch had rusted, swollen, and seized in the receiver). In order to remove it, we ended up having to destroy the RakAttach. In consideration of buying a new product, I am curious if the coating and/or corrosion (perhaps dissimilar metals in the construction?) are a known issue in the early models that has now been fixed?

Hi [Austin] We powder coat all the tubes.
The rust is an issue for all brands of steel swing arm I have seen.
I would suggest a layer of grease if you decide to get a new RakAttach or any other version.
Thanks!
Walter