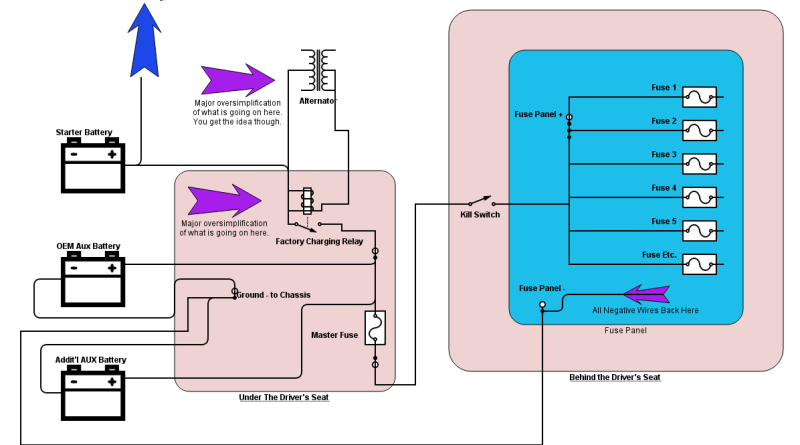 There is a ton of information out there on how to correctly do the electrical for your van. I read a lot of it. My conclusion: there is a lot of ways to skin this cat and, like many things on the internet, everybody disagrees with each other on the “best” way to do it. In the end I chose the method that seemed the most straightforward to me. So far it is meeting my needs.

Get a fuse box and a lot of wire. Choose the wire gauge wisely based on the circuits you are going to run. You can run just the positive terminal and ground to the body if you are not interested in ever “closely monitoring” your power usage. If you want to monitor your usage to a high level of certainty, run the grounding wires back too. A 6 circuit fuse box was not enough for us. We had to upgrade to the 12-circuit mid build. It really isn’t that complicated once you get down to it.

Doing the electrical is a pretty tedious process of running wires, stripping wires, crimping wires, and connecting things together. It can be very dangerous, but in the end I thought it was pretty simple. As I said before there are a lot of opinions about the “right” way to do things. I chose the simple path that made sense to me and that seems fine for now. I have protected everything with fuses and used appropriately gauged wire, so I am hopeful that it is safe and secure for many years to come. That being said, I am not an electrical engineer, contractor, installer, anything. I am not really giving advice here, just stating what I did for the record.

I started out with a very detailed electrical diagram:

That pretty much sums it up. 2 batteries wired together. A fuse box and solar panels. The solar panels I will talk about in a different post. I’ll try to describe some of the salient details here.

We ordered our sprinter with the factory auxiliary battery. I believe this simplified things, since I already had a factory battery isolator (ACR) to charge the auxiliary batteries from the factory alternator, while keeping them isolated when the vehicle is not running (maintaining the starting battery for just starting, leaving the auxiliary batteries for auxiliary things). So the detailed V1 diagram above is a little misleading – there are more batteries and some more hardware involved. So, in order to make sense of things I have developed V2 for reference. Note, I created this version after everything was already wired up and done, sitting here creating this blog – so much to say, it isn’t a required part of van wiring to make a fancy diagram. The tool available online from DigiKey is pretty fun to play with though. Even if I didn’t understand most of its functionality. V2 attempts to be more detailed than V1, but my understanding of the concepts hasn’t really increased that much. So don’t pay any attention to the factory charging relay, alternator, starter battery etc. I don’t really know what is going on there – you can find more information in the Sprinter Bulletin Here: aux connect. My main point of interest was at the “2. Aux Battery Electrical Tap”. We didn’t mess with anything else.

As shown in v2 of the wiring diagram, we went with 2 auxiliary batteries. The OEM auxiliary battery, which is located under the hood, in the spot that you would usually find a starter battery on other vehicles (I am told the vehicle starter battery is located under the driver side floor boards, but I have never actually gone looking for it) and another auxiliary battery we purchased separately placed under the passenger seat, next to the Espar heater. No I am not worried about the proximity of the battery to a heat source. We have run the heater continuously for several nights without incident. The strap holding the battery to the wall does a good job of providing separation between the hot parts of the Espar heater and the soft (plastic) parts of the battery.

For battery selection, I went with cost effective. The OEM auxiliary battery appears to be a 95 amp-hour (AH) AGM battery, so I tried to match this selection. There was a lot of talk about how having matching batteries can improve battery performance over time. This seamed reasonable to me so that’s what I did. But I didn’t feel the need to purchase a very expensive name brand AGM battery. I found a 100AH battery on amazon that had good reviews and it has worked well for me thus far.

I did a whole ton of reading about why or why not to wire your batteries directly to the factory alternator (via the automatic charging relay, of course). People do all kinds of things here including getting another alternator, avoiding the alternator and relying on solar/generator, converting the alternator to AC then back to DC via a double inverter… In the end I couldn’t find any reason not to do it the simplest way. The alternator in our sprinter is designed for 225 amps – you could literally run an arc welder off the alternator. I found it hard to believe that it couldn’t handle charging a second battery (or more). It appears that a lot of people have drawn this conclusion as well, so if it’s a bad choice I will have lots of miserable company. Of course, I am far from an expert on this kind of thing – so READ UP and make YOUR OWN informed decision.

The auxiliary battery terminals for both of our batteries come to under the drivers seat. There is a plastic conduit that runs between the two front seat pedastals that we used to convey the 2-gauge wires and protect them from foot traffic in that area. To get it it, it requires removing the floor liner, removing the rear heater vent (if equipped) and prying up multiple plastic tabs. We ran a pilot wire through the plastic conduit to make running a few wires back and forth easier. Duct taping the wire to be pulled onto the pilot wire allowed us to pull the wires through, having enough additional length on the pilot wire allowed us to pull the pilot wire back so as to allow multiple pulls through the white plastic conduit to the driver’s seat pedestal.

There, on the back end of the driver’s seat pedestal is a terminal block with a copper … thing. The upfitter’s guide says that this is a fuse. If it is, it’s not like any fuse I have ever seen. I got rid of it and replaced it with a 100A “mega fuse”.  This provides a baseline of protection for all of my downstream circuits, my battery wiring, etc. Because the driver’s seat pedestal is crowded with all kinds of wires that I was afraid to mess up, I didn’t do much more wiring in this area (save for connecting a “master ground wire” (2-gauge) to the chassis ground lug in this location, as well). Everything else I put in a (not-so) little wooden box built and bolted behind the driver’s seat pedestal. This serves to house the other electrical gear, including the kill switch, solar charge controller, main fuse panel, amp and other accessories for the sound system, and a whole bunch of wires running everywhere like spaghetti.

The electrical box serves as pretty nice seat, when the van is parked and the driver’s seat can be moved and leaned forward. We added some padding to the lid which made it quite comfortable. Inside all the electrical gear is kept mostly organized and out of the way of damage from movement within the van. From there it is also an easy and clean jump into the B-pillar for wires going back into the main cabin of the van. For wiring, we didn’t do anything fancy, just ran wires through the cavities in the van frame to the various points of use. Lights, usb power, 12V+ power, fan, etc. Its pretty straightforward once you get into it. We tried to utilize different circuits for all the various ‘categories’ of equipment to keep things straightforward.

All in all I think it turned out pretty well. We are very pleased with all the various electrical items that we bought and I wouldn’t hesitate to recommend them for other builds. For the fuse box, I will mention that we started out with the 6-circuit panel and ended up running out of space – so we upgraded to the 12 circuit panel. Maybe that’s a recommendation for better planning of your circuits before diving into the project and purchasing the materials. Below are some additional photos of the electrical box and other electrical accessories “for the record”.