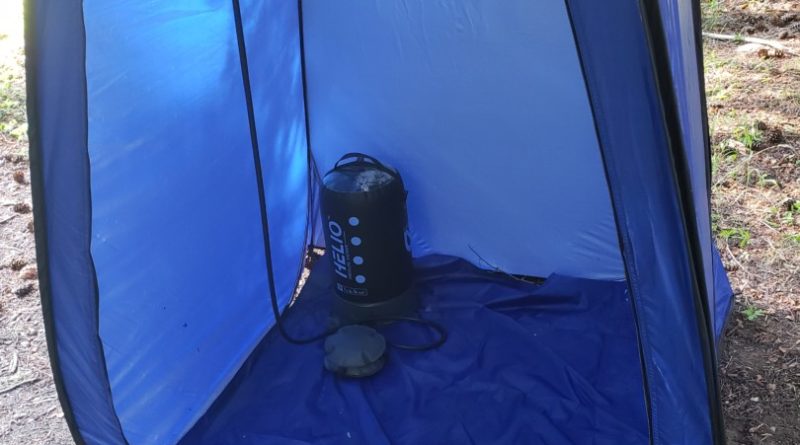 Taking a hot (or even warm) shower in the backcountry after a long day of mountain biking or hiking is definitely a luxury. But then again, so is having a nice van to cook, hang out, and sleep in. So in our quest to be more and more comfortable on the road we began researching the best options for showers.

We’ve found that the best shower setup for our needs (cost, practicality, ease of use, simplicity) utilizes the following:

There are a number of options for backcountry / van showers that we looked into. Many of them are owned by friends and so we got to see them and sometimes try them first hand. Here’s a quick list of options we found:

Clearly there are a lot of good camping / portable shower options. And they are all good options for different reasons. But here are some of the pros and cons that we came up with for each of the above, which led us to what we are very happy with today.

#1 The Road Shower aka PVC tube on the roof

In the beginning I was all about this shower. What could be easier than having a PVC tube on the roof, catching sun rays all day long, and being ready to use without hardly any pre-planning. But then I realized a few issues – one of which was a deal breaker.

Pros: Passive solar heating all day, without having to set anything up; just add water. No complicated pumps or batteries to change. Minimal pre-planning required (as long as water is already in the tube).

Cons: Adding lots of weight to the top of the van. Difficult to refill – you need a hose or pressurized means (perhaps a few buckets hauled to the roof of the van) to refill. The refilling was the biggest deal-breaker for us.

The standard solar shower bag. What could possibly go wrong?

Pros: Passive solar heating provided you remember to put the bag out in the sun. Easy to fill up the bag from any source. Not mechanical parts really – very simple setup.

Cons: Have to remember to put the bag out in the sun. Gravity flow only – have to hang the bag from something for water to flow out the spout. Perhaps the one we bought was not as high quality as others – but the solar shower bag that we got broke after the second use (shower head fell off). Then the valve got to hot and seized in the close position. So while this seemed like a nice option initially, it was not ideal for us.

#3 Battery Pumped Shower out of a Bucket

A friend of ours has this setup. It seems pretty nice. This could be combined with a solar shower bag (heat the water in the bag – then pour it into the bucket) for a great setup.

Pros: Can use water from any source. Passive solar heating. Bag doesn’t need to be hanging. Shower head is separate from bucket so you don’t have to leave much outside while you are warming the water. Cost – at the time of writing you can get this setup for less than $50!

I haven’t used one of these so can’t really comment. Essentially a propane fired water heater with a pump on the cold water side and shower head attached. Maybe someday I will have the opportunity to try it. Probably overkill for our current needs, given that we don’t have shower facilities inside our van. Maybe an upgrade for winter camping trips someday.

Another friend of ours has this setup. On the surface, it sounds like a great idea. I like that it doesn’t require batteries and doesn’t require pumping. But I don’t like that its not really “refillable” in the field. Sure if you can get a hose from a gas station or someones front yard you are set – but I don’t like having those kinds of constraints. And only 4 minutes of water – that’s probably enough for one person, but not really enough for two.

Pros: no batteries or pumping.

Cons: Water doesn’t really heat up in the tank – even if you put it in the sun. Apparently there is an attachment to heat the water, but I haven’t seen it. Not a lot of water. Requires pressurized attachment to fill – not really fillable in the field (from a lake or stream, for example).

And finally or currently chosen shower setup. The Nemo Helio, with foot pump. It shares many similarities to other shower setups in this list, but for us it is the perfect combination of them.

Pros: Maintains the simplicity of a solar shower bag and the easy fill capabilities from any source. Foot pump doesn’t require batteries and works great. Nearly 3 gallon tank (11 liters) is plenty big for both of us to take a warm shower usually with enough water to spare for another shower the next day.

Cons: more complex than a simple gravity solar shower bag. Tank must be left outside for heating. At around $100, its not the cheapest option on this list (which makes leaving it outside even more concerning – that’s why we warm our water in our broken solar shower bag, if we are leaving something outside while we ride bikes).

In addition to the Nemo Helio solar shower, we also have added a pop up Portable Privacy Tent (like this one – $40 at time of writing) to our setup. This provides privacy and allows us to setup the shower away from the van (if desired) and gives us a plenty of room to work with to clean up. Additionally, as mentioned previously we use our broken Solar Shower Bag (like this one ) for heating the water when we don’t want to leave the helio out or for providing extra hot water. Since the valve and shower head on the solar shower bag are broken, we just plugged the piping with p-tex. This also minimizes any worries about it leaking.

Sure all of the above listed options have their place. And everyone has different requirements and priorities. This is just what is working the best for us. Let us know what your favorite shower setup is in the comments!