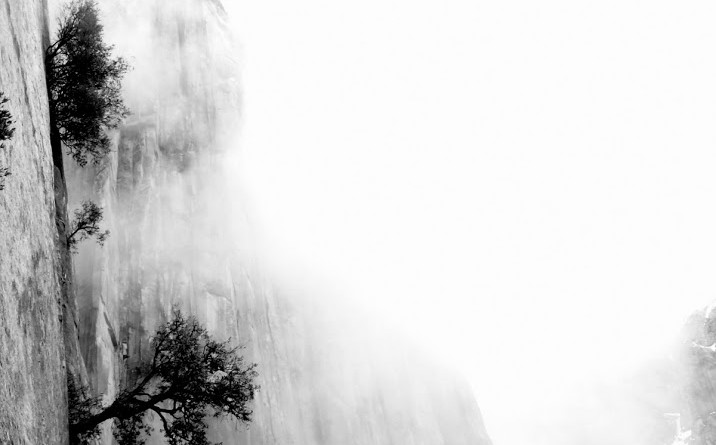 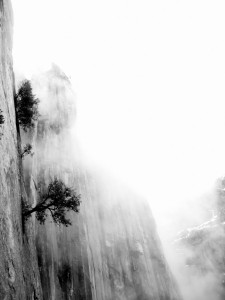 I have always wanted to do a winter big wall in yosemite and this new years I had the opportunity to try. My friend Ned who lives in the Valley was interested in learning how to haul and spend a few nights vertical camping so I headed down on New Years eve.

I arrived in Sacramento at 8pm wednesday night amidst low visibility fog warnings and was in my rental car and on my way by 9. They weren’t kidding about the fog. Most of the trip up to yosemite was spent cruising at a brisk 25 miles an hour “feeling” my way up the 120 and into the park. Roads were pretty icy too but despite all the “chains required – no exceptions” warnings my little rental car did just fine getting me to foresta by 2am. 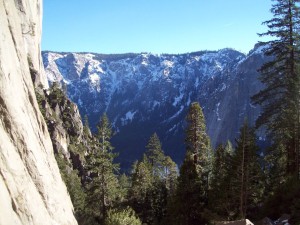 The weather called for good weather thursday and then a 50% chance of rain on friday with gradual clearing for the rest of the weekend. That forecast seemed workable so we were racking up that first night and on approach to the Ribbon Fall wall thursday morning.

Our plan was to head up the Gold Wall (5.8 C2) and despite the hellishly long approach we made good time and navigated the random bear trails perfectly to the base of the wall. We filled up water at the base of the ribbon fall which I must say, that ampitheter, was the highlight of my trip. Very cool.

Ned led the first pitch and it took him so long to climb 5.9 with 50lbs of aid gear on his harness that we ended up bivying only 150′ off the deck that first night. That turned out to be a good thing when it started raining late that night and freezing rain into the morning on friday. 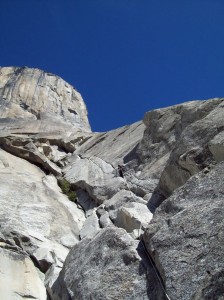 The prospects of getting anywhere fast looked pretty bleak and since we were only one pitch off the ground we decided to rap from there and head back to Foresta to dry off. About half way through a wonderful post-failed-climbing-objective drinking binge on friday night I stepped outside to relieve myself and noticed that the stars were brilliantly sparkly overhead.

Ned and I repacked our gear that night and this time went for the much shorter approach to the Salathe Wall on El cap under crystal clear sunny skies saturday morning. Gearing up in snowy El Cap meadow was the winter yosemite experience I had been hoping for. And other than a group that came in to daytrip the first pitch of the nose we were the only people on El Cap. I lead a couple of pitches up Salathe Wall and Ned kicked us up a few more for a good night on the ledge under a nice overhang to protect us from ice fall off the face above us.

Sunday morning we rapped, derigged, and I headed back to the airport for my flight back home. All in all a great trip to yosemite. Though it would have been nice to stand on top of something it was super fun to be hanging out in yosemite in the winter time and I look forward to giving another go to the Gold Wall this spring.