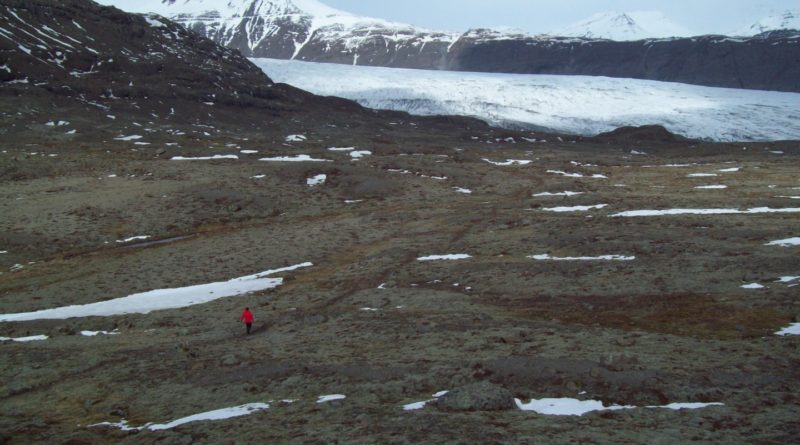 We had heard a lot about how amazing Iceland was and we were drawn in by the pictures of massive glaciers, magnificent waterfalls, and mystical steaming hot springs. But in the end, our honeymoon in Iceland was mostly lukewarm. I would still highly recommend a trip to Iceland, there are beautiful things there that I haven’t encountered anywhere else. But you can pretty  much get all that you need in 3 – 5 days – two weeks was just too long. Below is a brief recount of our adventure, circumnavigating the island of Iceland in April of 2013. Briefly, here are the highlights and recommendations: 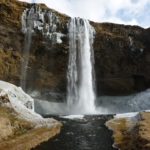 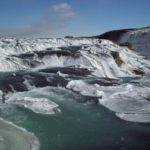 We wanted to avoid the super touristy summer season to both dodge the big crowds and also save a little bit of money. We had heard that tourist pricing ramped up significantly in the summer months (starting about may) so we tried to plan our trip accordingly – aiming for the best spring weather, but lower prices and tourists. This was probably our first mistake. We’d heard from others that traveled to Iceland at a similar time frame in years past who had great weather; we did not. We had terrible weather pretty much the entire time we were there, with extremely cold temperatures in the single digits and teens (farenheit) and lots and lots of snow. The weather certainly played a role in our somewhat lackluster trip. The second error was our interpretation of what “cheaper” meant. Iceland is ridiculously expensive – I can’t imagine what its like during the high tourist season. Having mostly traveled in Africa and South America before I was not prepared for the prices of restaurant food and decent lodging in Iceland (tip: cook your own meals, grocery store pricing was actually pretty reasonable). 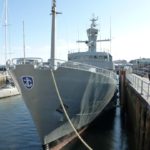 Day 1: Take the overnight Iceland Air flight to Reykjavik. Take the flybus into Reykjavik. Check into our hotel, the Hotel Fron (thanks to early check-in this worked out very nicely). The hotel was sparse but nice – it took us a while to get used to the generally strange geometry of Icelandic buildings. From there we explored Reykjavik.

Day 2: More exploration or Reykjavik. Very cold but clear. The Reykjavik Maritime Museum was definitely worth checking out – especially the tour of The Coast Guard Vessel Óðinn. Also the Reykjavik Family Park and Zoo was kinda interesting – but completely deserted. I guess we got what we asked for with no crowds. 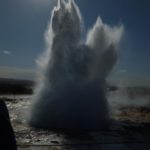 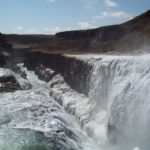 Day 3: We rented a car from Car Rentals Iceland. They had the best deals on 4WD vehicles and given the weather, I was so glad we spent the extra money on a 4WD. The one we rented also magically came with studded tires – which proved to be very handy later in the trip. From there we did the classic driving loop out of Reykjavik to visit Geysir, Gullfoss, Skogafoss and the myriad of other cool hot springs and waterfalls that dotted the way. This day was definitely a highlight of the trip. The waterfalls and the geysers were amazing and beautiful. This is what makes visiting Iceland totally worth it – and it can be done in a day trip from Reykjavik, it doesn’t require a 2-week circumnavigation. We stayed at the lovely  Sólheimahjáleiga Bed & Breakfast, which was a super cool bed and breakfast at a working sheep farm. The proprietor was very friendly and the accommodations were quite nice. 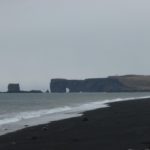 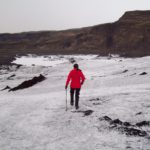 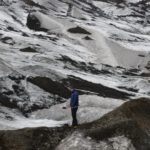 Day 4: We explored the Sólheimajökull glacier which was very cool. Though it took us down a crazy windy rocky and steep gravel road to get to the parking area (once again thankful for 4WD). We were cautioned by everyone we talked to not to go out on the glacier without a guide and this is certainly good advice. Untrained glacier travel is extremely dangerous. But as a former mountain guide we did not heed this advice (we had brought our own crampons and safety gear) and very much enjoyed our own private glacier hike. Again – unless you know what you are doing, this is not recommended. After spending a few wonderful hours on the glacier we headed east to Skalafell. The weather on this part of our journey was horrendous. I imagine there were probably some pretty sights along the way – we did not see any of them. We stayed at the Guesthouse Skalafell which was probably one of my favorite places we stayed. 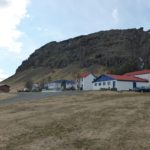 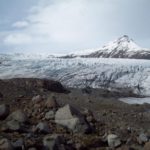 Day 5-6: There were hiking trails leaving right from the property at  Guesthouse Skalafell  so we didn’t have to drive anywhere. We explored the mountainous region and made our way to the toe of yet another glacier. It was really beautiful countryside here and honestly I could have stayed there for an extra day exploring more and then turned around and called it good. I feel like these first five days of the trip really captured the essence of Iceland. Sure there is a lot more to see and I wouldn’t argue with anyone who said you would be missing out on some other amazing sites. But to me, you can avoid a lot of road miles, expense, and awkwardness by stopping the journey here (with maybe one or two exceptions, noted below). 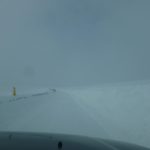 Day 7-8: We continued around the island in our counterclockwise fashion to Eskifjordur. Honestly I can’t tell you much about this part of the journey. It was near white out conditions most of the time, snowing and blowing sideways. Our lodging in Eskifjordur was unremarkable.We had hoped to make our way up to the northeastern peninsulas of Iceland, in the area of Þórshöfn, but it unfortunately was not to be. So instead we stayed on the main Iceland ring road and lodged at the Guesthouse Stong, which was a cool farmhouse style lodge, but was really awkward (and under construction), and not very friendly. 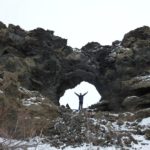 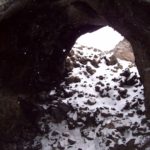 Day 9: The roads finally opened up and we made our way towards Akureyri. On our way we spend some time in the Lake Myvatn area. This was definitely another highlight area of the trip, it’s too bad it is so far away from everything else. Since we had skipped the mega popular blue lagoon near Reykjavik, we decided we needed to at least have the authentic nature hot springs experience at the Myvatn Nature Baths. These did not disappoint. Because the road had just opened back up (and was actually still closed in one direction), we had the place completely to ourselves. 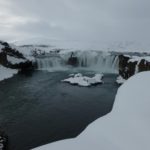 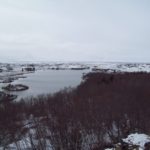 There are a bunch of great sights around the Lake Myvatn area. In addition to several cool hikes around the lake itself (there were actually some trees!!!) there were several other cool lava formations and craters to check out. This area definitely had a violent geologic history.

We stayed at the Akureyri Backpackers hostel, which offered nice accommodations but felt kinda anti-social. Like a lot of the places we stayed and visited it didn’t seem like people were overly warm and inviting or interested in helping us to enjoy Iceland to its fullest potential. They mostly just did their own thing and expected us to figure it out. 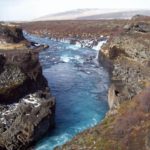 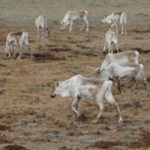 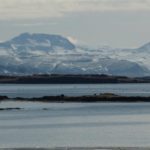 Day 10: We had planned to head out the northwest peninsula, but once again, because of weather, we had to change our plans. We headed southwest out of Akureyri and headed to the Vogur Country Lodge, which is on the opposite peninsula (north) o f Snæfellsnes Glacier on Breidafjördur Bay. While there wasn’t a lot going on in this area, the scenery was truly spectacular, the lodge was wonderful, and the food was the best we had in all of Iceland. The lodge owner really went out of his way to make us feel welcome and really for the first time in Iceland we felt like we weren’t intruding. I am not entirely sure why you wo uld head out there (other than if you were just driving around the island like we were, but even then its kinda out of the way) but of all the places we stayed this is the lodge I would recommend most. We really loved the accommodations and the hospitality there. 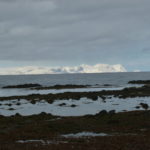 Day 11: From there we headed towards the Snæfellsnes Penninsula, which I imagine is very beautiful but was just cloudy and rainy for us. We stayed at the Old Post Office Guesthouse – which was not particularly nice.

Day 12: It continued to rain on us around the Snæfellsnes Penninsula but on our last night in Iceland the weather managed to clear a little for our stay at some nice little cabins at the Lækjarkot Rooms and Cottages 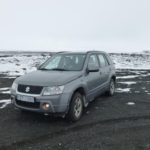 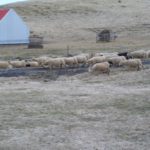 Day 13: Finally on day 13 we headed back to Reykjavik, dropped of our rental car, and took the s huttle back to the airport.

In hindsight we probably didnt do it right. We should have gone in summer. We should have booked tons of guided excursions and filled our days with adventures. We should have done a lot of things differently. But we didnt. We were on a tight budget and wanted to drive around the island (why this goal was important, I dont know). I have talked to a several other people about their Icelandic adventures. Some had simi lar experiences to us. Othe rs had a lot more fun. Like I said in the beginning, overall it was definitely worth going, but I think we could have cut the trip short by a week or more.

One thought on “Iceland: Recommended for a Visit not a Vacation”