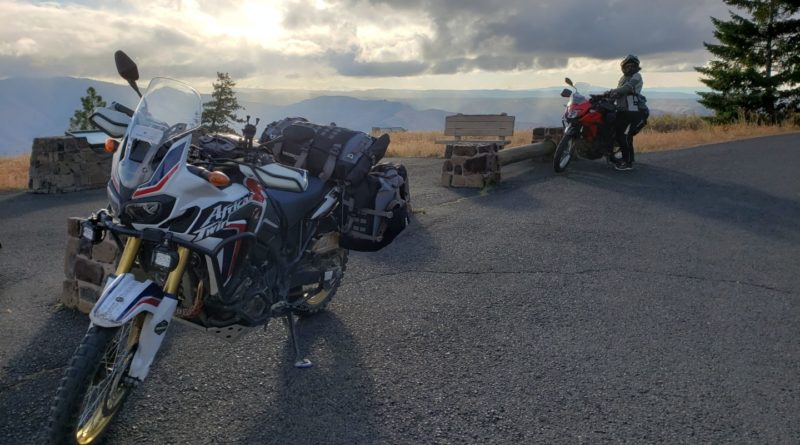 With a limited amount of time and the weather looking pretty questionable for anything in the cascades, we decided to head east into the Wallowa Mountains. Although we didn’t have enough time to properly explore the area, this trip definitely introduced us to the amazing beauty of the region and we are certain to go back next summer, with more time to explore more.

TL:DR – Below is a map of our route. This route was mostly paved (only a short section of gravel in the middle 🙁 )We spent one night at Woodward campground, outside of Tollgate, Oregon, and the second night at Indian Crossing campground, near Halfway. Had a great meal and the best horchata ever at La Laguna in Joseph. Checked out Wallow Lake state park (lake is cool – park is… crowded) and rode the Wallowa Mountain Loop road (awesome!). Hell’s canyon overlook is definitely worth the short side trip (and a really fun twisty road!).

We left Hood River a little later than desired (slow to pack, waited for better weather – which never came, etc.) and in the rain. But soon after we got underway the rain stopped. We had the idea to take a little more adventurous route to get east, but with our late start and a desire to ‘get to the new stuff’ faster, we just took the interstate over to Pendleton. By the time we got to Pendleton it was already getting dark – but the weather was good and we had a destination in mind, near Tollgate, Oregon – so we pressed on.

As it got darker and we continued west, we started to notice flashes of light in the sky. They become more and more frequent as we approached Weston, Oregon. We were briefly distracted by the eminent weather danger from the awful stink that was Smith Frozen Foods. Oh. My. Goodness. I am not really one to gag from things, but the stench around that place (Weston, Oregon) was the foulest thing I have ever smelled. Avoid if possible.

We headed up the hill on Highway 204 towards Tollgate. I think the first bigger clue that we might be in weather trouble was the cars that kept on flashing their lights at us. By now it was dark and just starting to sprinkle – no worries, we were only 10 miles or so from our intended campsite in the Blue Mountains. We continued on.

At about 5 miles to camp the skies opened up. Literally zero visibility in the dark and instantly soaked. Our speed slowed to a crawl. We had originally hoped to get to Woodland Campground. Well, that was 4 miles too far in this rain. We were spared having to ride in one of the worst downpours I have ever seen by Woodward campground – a somewhat awkward spot on the shore of a private lake that you don’t get access to from the campground. No matter, we couldn’t see it in the rain, in the dark, in the lightning and thunder… anyway.

Setting up the tent in the torrential downpour was special, but we ran the trick of setting up the rain-fly first (with the integrated groundcloth – thank you Big Agnes!) and so we could set up our tent without getting it soaking wet too. With shelter made we escaped the rain in our soaking wet gear, made a quick dinner and tried to sleep. Our sleep was interrupted several times by intermittent hard rain that pelted the rain-fly so hard the condensation on the inside of the tent would mist down onto us. It was really something quite special – that I don’t care to experience again.

The next day greeted us with overcast skies, which was a relief – but didn’t offer any opportunity to dry things out. We packed up our wet gear and headed towards Elgin, Enterprise, and Joseph. Temperatures in the morning were just above freezing, which made for a very cold ride until we got down lower into the valley.

Enterprise and Joseph are cool small towns. Even late in the tourist season (late September) and in the covid era, things were bustling with people out walking around, eating at restaurants, and shopping. We continued through Joseph and up to Wallowa Lake State Park. The ride out there is gorgeous – with big views of the Wallowas and the lake itself is incredible – reminded me of scenery from Southeast Alaska. The state park itself is everything you expect a state park to be. Very busy, lots of giant campers, and a lot of rules. We didn’t stay there long.

Back in Joseph we had an excellent lunch, seated outside at La Laguna. The food was excellent and having a warm meal was much needed, but the highlight was the homemade horchata. Wow! I have never tasted something this good. From there we plotted our next move.

We had kinda hoped to check out the Imnaha area – but with our late start and mellow pace it seemed like that was mostly out of the question at this point. So instead, we decided to head directly to the Wallowa Mountain Loop Road (Forest Service Road NF-39). Its a nice paved road with mellow twisties that follows Little Ship Creek as it heads south and up into the Wallowa mountains.

We did manage to find some fun gravel/dirt riding on a short-cut we found near Lick Creek Campground. Knowing that we wanted to stay at Indian Crossing (didn’t know anything about it at the time, but it looked like a nice location along the Imnaha River from the map) we noted that Cloverdale Rd. cut off a section of NF-39. It was a really fun diversion that provided some epic views of the Imnaha valley. Well worth the it.

Following the Imnaha River on NF-3960 was pleasant. There are several campgrounds along the way, but we pressed on to the end of the road and Indian Crossing campground. There were a few folks camped there already but we found a beautiful spot at the end of the campground road. It was early afternoon and the sun was shining and warm – it was time to take it easy and dry our stuff out. We exploded our bags and got everything spread out on the ground to dry. It was a relaxing afternoon through evening and a welcome change of pace from the camp setup the previous night.

On our last day we made the long trek back to hood river. This was quite the grind that had us leaving pretty early in the moring and riding into darkness before getting home. On the way out of the Wallowas, we took a short side trip to the Hells Canyon overlook. This was absolutely worth the trip – if nothing else for the road up there, which was beautiful twisty pavement winding up the canyon wall. Very fun to ride. And the view from the overlook was absolutely spectacular. The pictures really don’t do it justice, as they highlight too much of the mist that was still in the morning air – but the vast openness of Hells Canyon was amazing to witness.

From there we winded our way out of the Wallowas and through Halfway, Pine and Richland on Highway 86. At Umatilla, we got off the interstate and took highway 14 back to White Salmon/Hood River. I had never been this far east on the 14 and it was cool to get a different perspective of the Columbia River. We also checked out the World War I memorial ‘Stonehenge’ outside of Maryhill. Its definitely a strange monument for the war but a nice way to recognize and remember the soldiers and sailors of Klickitat County.

Back at home everything came back out of the bags again to dry and be cleaned. A good trip but way too short.

Lesson learned – next time we are going to ride a couple-hundred miles to a destination, we should probably plan enough time to really explore once we get there. I guess that’s what we’ll do next time.